A year or so ago in a TMI video I posted to youtube, I had said I wanted to visit South Africa and go on a safari. This is one of those things I’ve always wanted to do in my life, but never knew I would actually go through with it. Some time Summer, I had heard of Londolozi. Not knowing much about it, I googled it and fell in love with the photos I saw online.

I was having drinks with my friend and incredible photographer Gray Malin and he was telling me how he planned a 30th birthday trip with his family going to South Africa … and guess where they were staying … Londolozi. So when it came time to book my trip, thats exactly where we ended up.

After spending three nights in Cape Town, we took a 2 hour flight to Nelspruit airport. From here, we took a two hour drive to our camp site in the Sabi Sands gaming reserve. Almost the whole way was on a paved road, until the last 30 minutes where we followed a dirt path to somewhere that seems … and is … in the middle of nowhere. If you don’t want to drive the two hours from the airport, you can charter a small plane or helicopter and theres a small landing strip here on the property. 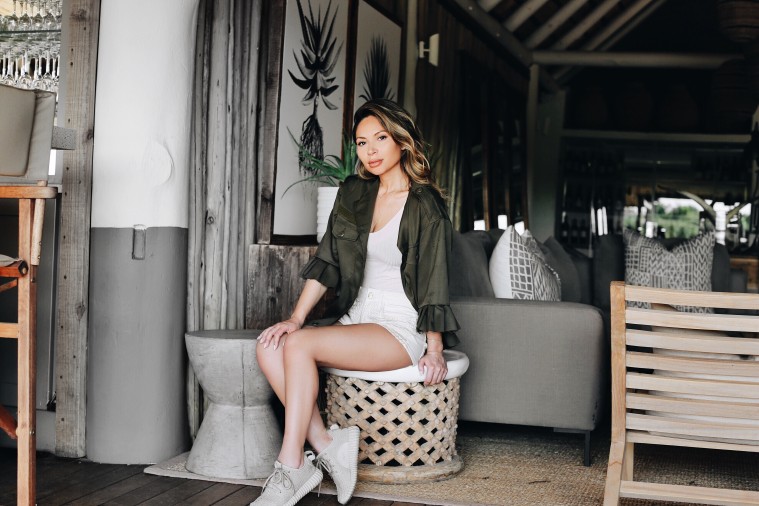 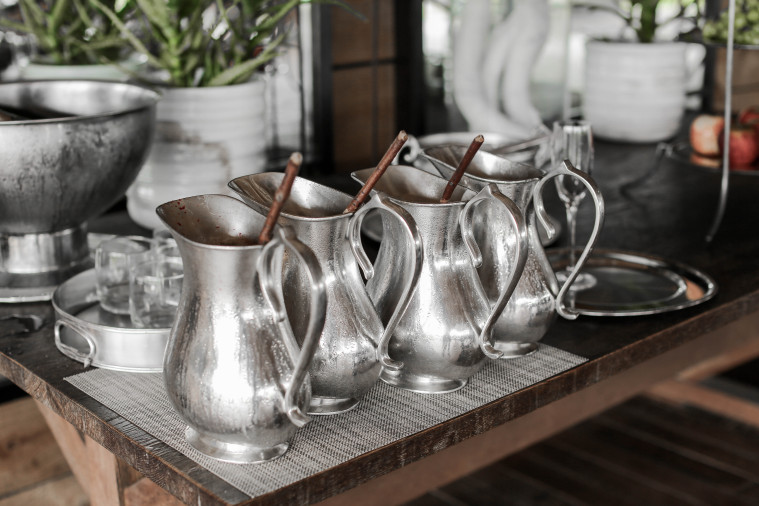 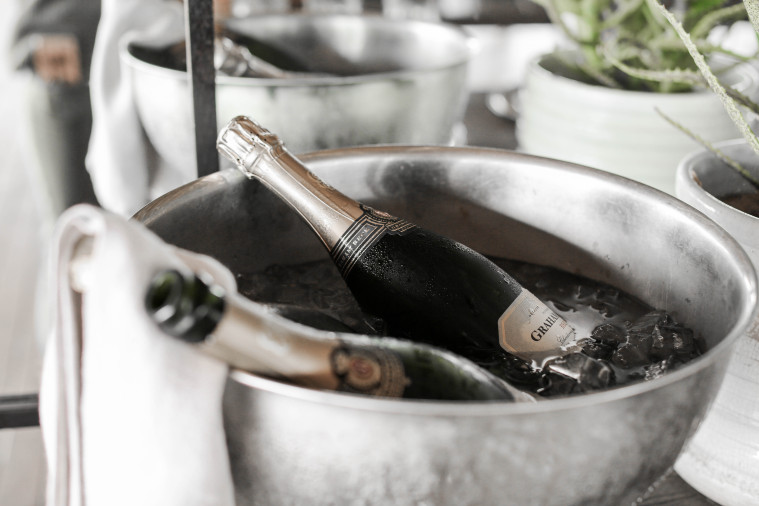 We finally arrived to the Londolozi around 3pm and after a long journey, was greeted by the most incredible staff who had a lunch menu and drinks ready for us. They gave us an orientation, helped me rent a lens and I quickly ate so we could make it out for the first evening drive.

I dropped my vlogging camera and broke the lens, so I’ve been taking vlog videos on my iPhone so that will come shortly. But for photos, I’m using my Canon 5D Mark III I brought with me and my 50mm lens won’t work for shooting animals, so I rented at 100-400mm lens and I’m shooting at 1/500 incase the animals are moving around and I set my ISO to auto so I don’t have to adjust anything.

There are two drives a day, in the morning and at dusk. For our first drive, we had no idea what to expect but my Dad and I were so thrilled to be out for our first trip on the safari. We have an incredible ranger named Sandros who can spot an animal so far away and is so knowledgable about each species. A tracker also joins us on our drives sand sits on the front of the Land Rover to help look for animals. On our first drive out, we saw so many animals we were so lucky! 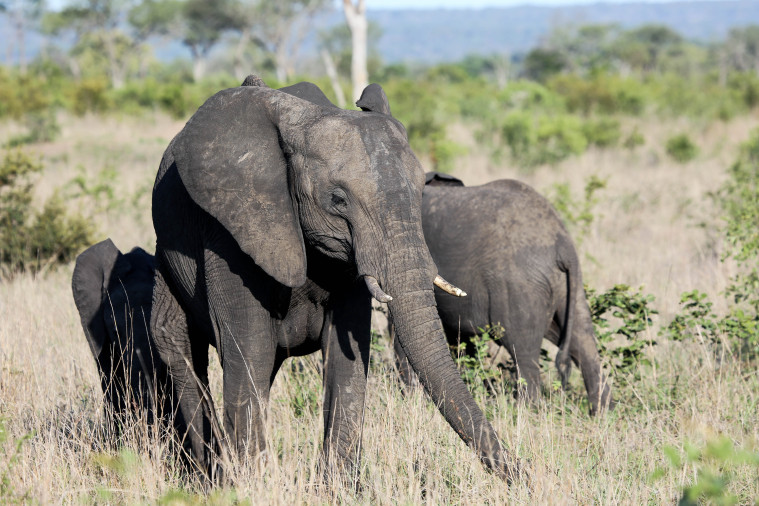 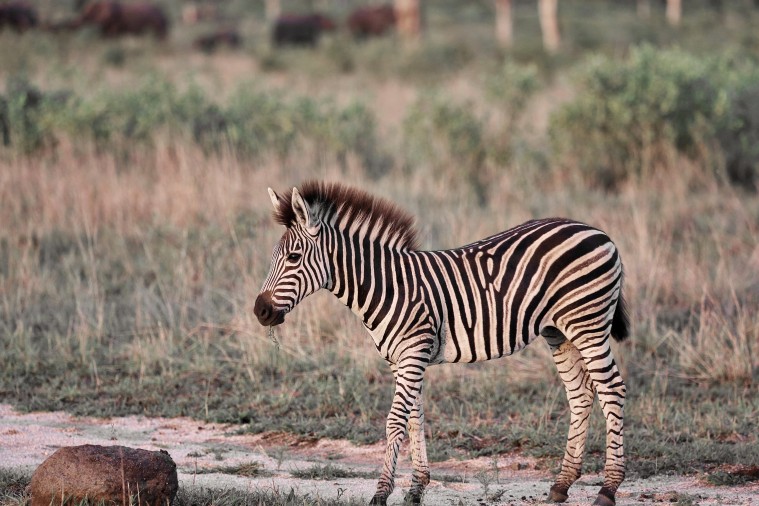 Spotting about a dozen elephants, we drive up close to them but not too close to invade their space and staying respectful to the animals and the land. There were two babies playing with each other and others standing near by. We watched rhinos eat grass for awhile and they walked right next to us, they were so close! On our ride, there were also zebras and a heard of wildebeest that I caught in the most beautiful light. 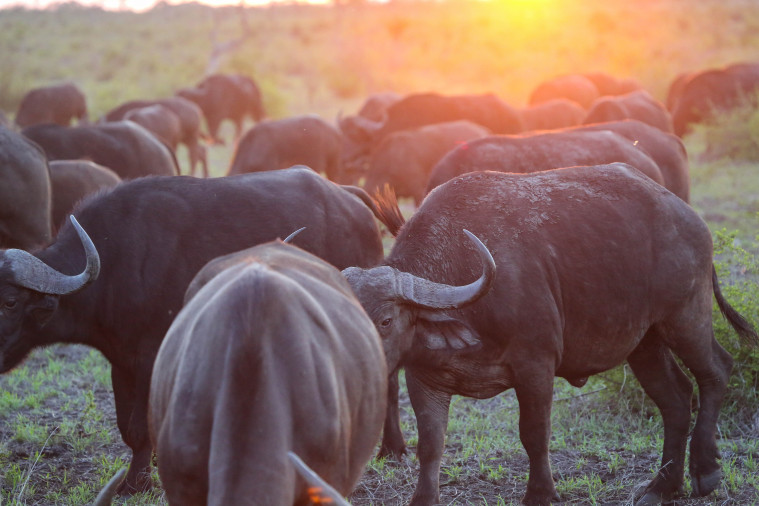 We stopped for an evening drink in a safe area and chatted with our tracker and the ranger and watched the sunset. When we returned back to Founders Camp, there are five camps at Londolozi, we were greeted with an outdoor dinner with beautiful tea lights. 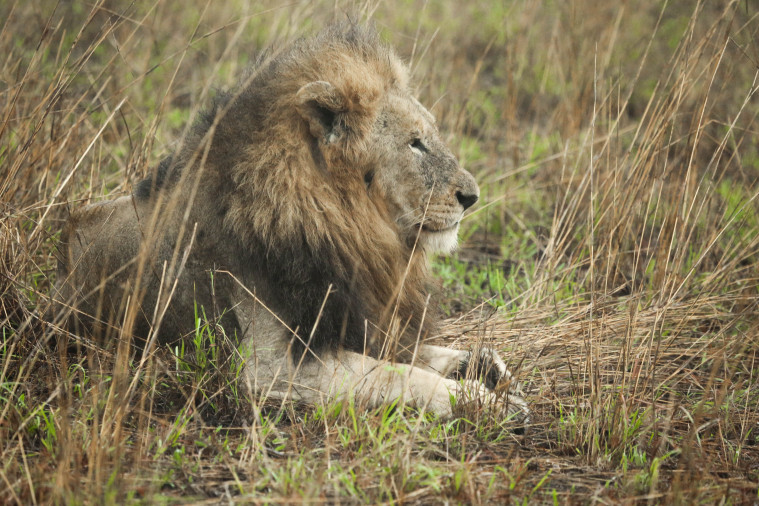 The next morning we had a knock on the door at 5am to wake us up for our morning drive. At 5:30am we went out for the morning and encountered some rain, but no matter the weather we still went out! I put on a poncho and my face and hair were SOAKED! But it was well worth it because we saw two male lions on this mornings trip.

Was I scared? Not at all. The animals are comfortable with people inside of vehicles because they cause them no harm. But once you step foot on the ground, they will defend their territory so we stay inside the open air land rover at all times. They sleep almost 18 hours a day, so they were relaxed and taking a nap.

This morning we also saw a rhino and a baby rhino that our ranger guessed was about one month old. We saw giraffes two times, they have the prettiest eyes! 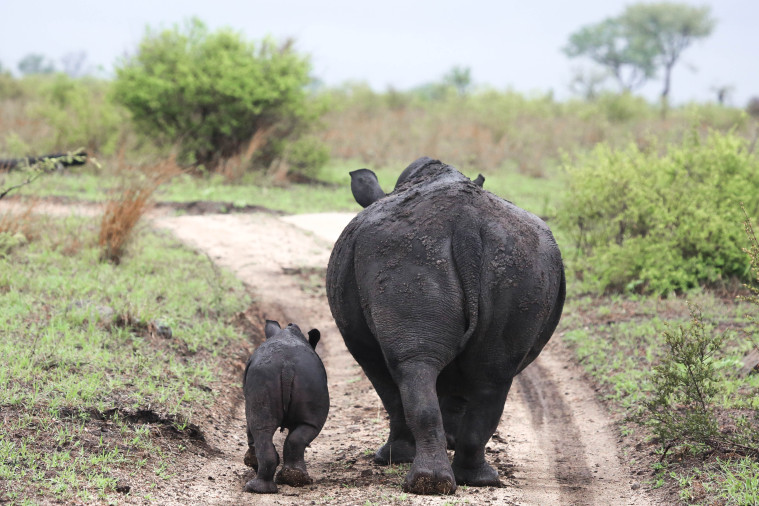 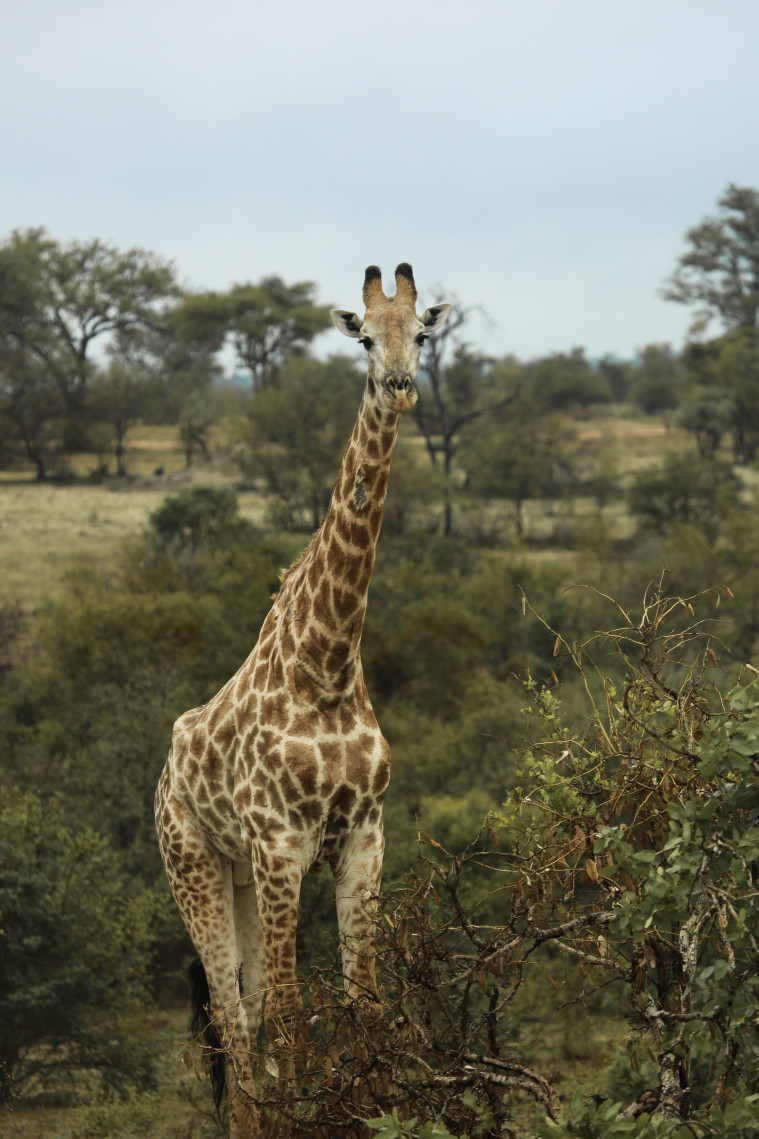 After our morning drive, we had breakfast outside then I took a few much needed naps. The wifi isn’t great here, as expected so I try to catch up with urgent work as needed but am definitely enjoying the time off and semi-disconnected.

For our evening drive, our goal was to see a leopard. We started the drive with the ranger and tracker, looking for tracks and driving around the reserve to find her. We looked all over for about an hour, not spotting any animals. Our ranger said well we haven’t seen her so lets move on and go find the lions … and literally as the sentence came out of her mouth we spotted a leopard to our right! 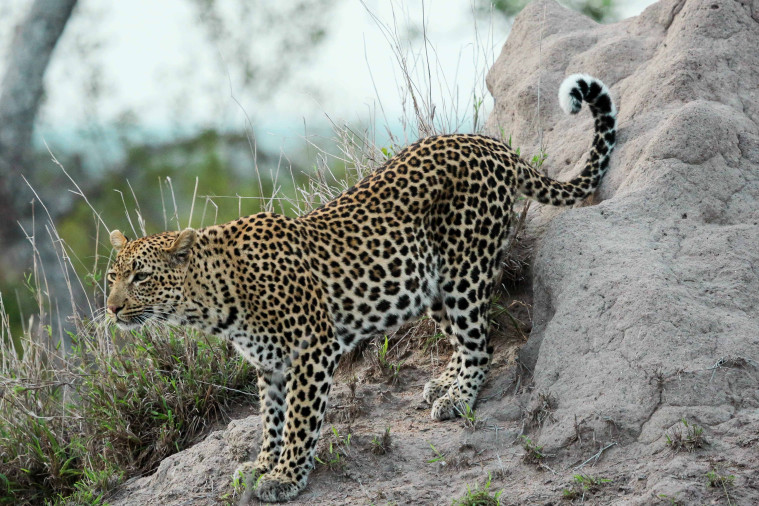 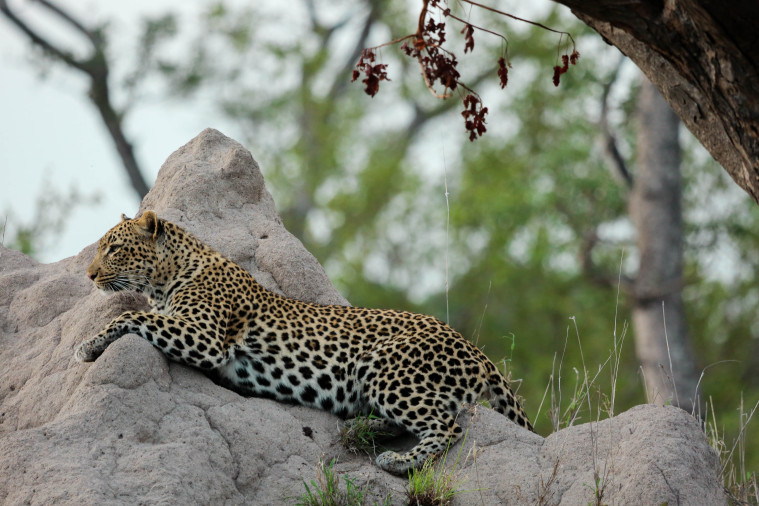 She was looking for dinner and our ranger said she looked thin as if she hasn’t eaten in a day or two. Her eyes were locked on some target and she was doing her best to hid behind bushes and mounds. We stayed with the leopard for about an hour and it was so interesting to see them in action. The closest she got, was walking behind our car and using it as a shield to hide herself to get to another area of grass.

After the leopard, we went back to the area where we saw the two lions sleeping and they were in the same spot almost 12 hours later. It was dinner time for them as well and we saw one lion get up and walk a little further away, hoping he would get something to eat but instead … went back for a rest. 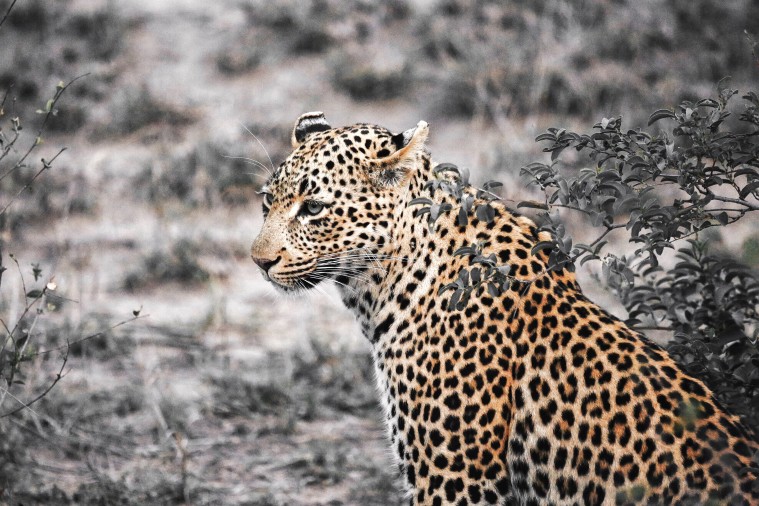 As far as safari clothes go, it really is all types of weather for our trip. I would pack comfortable light weight pants and lots of layers. Some days, it was really warm and I just wanted to be in shorts and a tank top. But when you are driving fast and going off roading, the wind can get really chilly and you need a jacket … especially when you go out for early morning and dusk drives.

When we weren’t out on the safari, I wore my usual clothes back on the camp site. I am a huge Aquazurra fan and these lace up shoes were perfect for not only my trip, but for Spring and Summer as well. The chunky heel gives this shoe a day to night option. 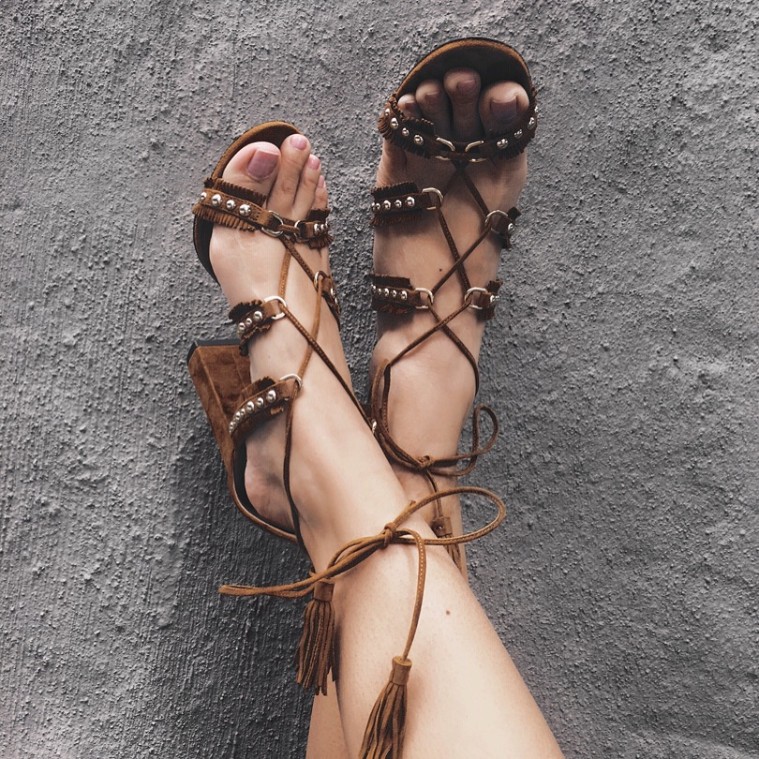 I kept my outfits light as well because it was honestly just so hot. For this outfit I wore a James Perse tank with a Free People skirt and my new Chanel wallet on chain that I got at the Chanel boutique at the London Heathrow Airport, thank you tax free shopping! 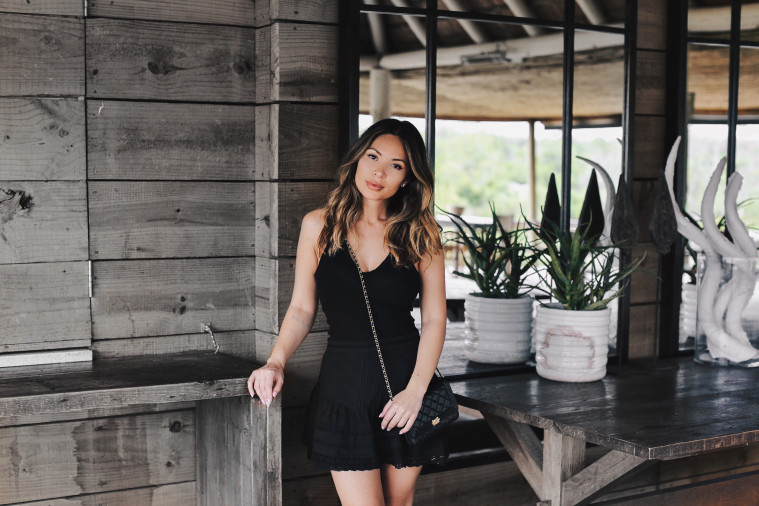 The safari trip was almost coming to an end and there was just one thing left I wanted to see, baby lion cubs. But our ranger and tracker told us to see this would be very rare. They knew of a female lion with two cubs but it would be a matter of finding them, then hoping they would be out or awake to get a glimpse of them.

The evening before, we found two female lions near their den and they had just caught something for dinner. The cubs would be near by, but hiding to stay away from animals trying to get to their kill. With no luck, we didn’t get to see the cubs that night. 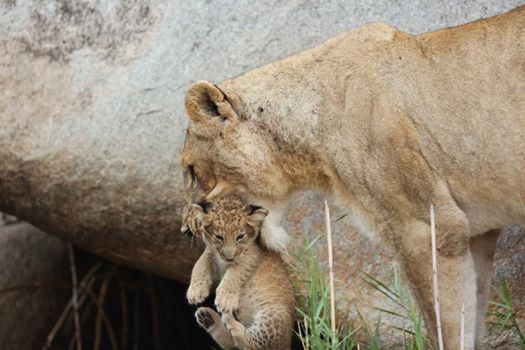 The next morning, we went out for our final drive and I’m so happy we made it because we got to see the baby lion cubs. We arrived near their den and the two babies were so playful. They came out to lay near their mother, then spent a little bit of time feeding off their mama for some milk. We knew the cubs were young because they weren’t eating meat yet.

They were the cutest things I’ve ever seen and we had a rare sighting of the mama lion picking up the baby lion by the neck and carrying it back into its den. This was the highlight of all the drives for me personally and the best ending to our safari.

I would highly recommend going on a safari and it isn’t scary at all. The animals don’t even pay attention to you, despite being just outside your door. The only animals I didn’t like were the monkeys, who were very aggressive so don’t get near them … they aren’t as cute as they seem!

No images found!
Try some other hashtag or username
life with me | site design by golivehq